SEOUL, KOREA - Media OutReach - 3 December 2018 - South Korea's trade growth remains relatively steady and upbeat despite its growth index declining by five points from the previous quarter, according to data from the DHL Global Trade Barometer released by DHL, the world's leading logistics company. The country's overall index for the three-month forecast period ending in January stands at 64 points, the second highest after India of the four Asian economies surveyed. 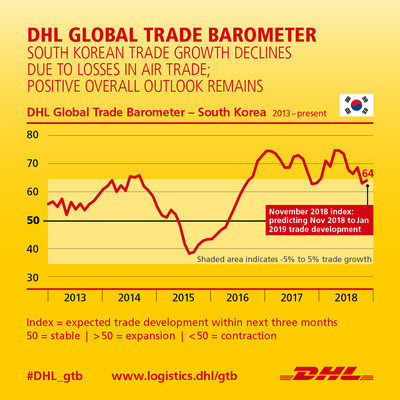 The DHL Global Trade Barometer, an early indicator of global trade developments calculated using Artificial Intelligence and Big Data, predicts that while the growth outlook for air trade in South Korea is to decelerate significantly by 11 points, ocean trade will stabilize after a positive first half in 2018 to remain unchanged at 66 points. That resilience in ocean freight owes itself largely to sustained demand for imports of Basic Raw Materials, Personal and Household Goods and Chemicals and Products.

"We are seeing robust growth on the import front in both air and ocean trade, both of which suggest that the South Korean economy will continue to flourish even amidst ongoing global trade fluctuations," said SP Song, Managing Director, DHL Global Forwarding Korea. "Strong imports of basic and industrial raw materials allude to the impact of recent measures to boost South Korea's domestic industries, including 15 trillion won (€11.6 billion) in government support for small and medium-sized enterprises, as well as 1.3 trillion won (€$1 billion) of credit guarantees for the automobile and ship-building industry.[1]

"While we observe substantial declines in South Korea's indices for some mainstay sectors like High Technology, others like Machinery Parts and Land Vehicles & Parts remain relatively stable. That should come as cause for confidence in the long-term growth prospects of South Korea's economy, even as trade volumes globally continue to fluctuate."

The Barometer's results also suggest that global trade will continue to grow over the next three months and that the development of the previous quarters will continue. The pace of growth, however, will particularly decelerate for Asia except for China.

"The DHL Global Trade Barometer clearly shows that the state of global trade remains solid. Both air and ocean trade continue to grow around the world. However, given the smoldering trade conflicts, especially between the United States and China, and economists' expectations that the global economy could cool down, it is not entirely surprising that trade momentum has weakened slightly," said Tim Scharwath, CEO of DHL Global Forwarding, Freight.

Indices for all seven countries that constitute the GTB index -- China, Germany, India, Japan, South Korea, the United Kingdom, and the United States -- are above 50 points. In the Global Trade Barometer methodology, an index value above 50 indicates positive growth, while values below 50 indicate contraction.

Launched in January 2018, the DHL Global Trade Barometer is an innovative and unique early indicator for the current state and future development of global trade. It is based on large amounts of logistics data that are evaluated with the help of artificial intelligence. The indicator has been developed in cooperation between DHL, the world's leading logistics company, and IT service provider Accenture. It is published four times a year. The next release date is scheduled for March 27, 2019.

DHL -- The logistics company for the world
DHL is the leading global brand in the logistics industry. Our DHL family of divisions offer an unrivalled portfolio of logistics services ranging from national and international parcel delivery, e-commerce shipping and fulfillment solutions, international express, road, air and ocean transport to industrial supply chain management. With about 360,000 employees in more than 220 countries and territories worldwide, DHL connects people and businesses securely and reliably, enabling global trade flows. With specialized solutions for growth markets and industries including technology, life sciences and healthcare, energy, automotive and retail, a proven commitment to corporate responsibility and an unrivalled presence in developing markets, DHL is decisively positioned as "The logistics company for the world".