SINGAPORE - Media OutReach - 12 November 2018 - The 33rd ASEAN Summit (and related Summits) are being held in Singapore from Tuesday, 13 November to Thursday, 15 November and Twitter is the best place to stay informed in real-time on what's happening at the region's biggest diplomatic meetings this week. For the first time ever, the ASEAN Summit will be livestreamed on Twitter via the Singapore Ministry of Foreign Affairs' official Twitter account @MFAsg (https://twitter.com/MFAsg).

World leaders will join the heads of Southeast Asian states in conversations on geopolitical developments, continuing progress on regional economic development and trade, and stronger regional socio-cultural identities. Business leaders, politicians, reporters and political commentators throughout the region, as well as anyone who wants to better understand how the 10-member bloc will move forward, can join in the real-time ASEAN conversations on Twitter with the hashtags #ASEAN and #ASEAN2018. These hashtags will also activate a special Twitter emoji depicting the official ASEAN 2018 logo: 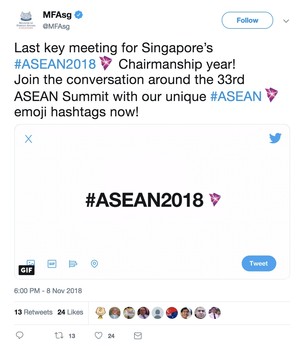 First-ever livestreams of ASEAN Summit on Twitter
To showcase the importance of the ASEAN region to a global audience, the Singapore government (as the summit host) will livestream and live-Tweet key summit activities listed below. Follow @MFAsg on Twitter now to be among the first to see what's happening at the #ASEAN Summit.

@MFAsg will livestream the following #ASEAN2018 events on Twitter:

@MFAsg will also be live-Tweeting the Opening Ceremony and Closing Ceremony:

The anticipation is building up on Twitter, so why wait? Be part of the influential Twitter conversation today using the #ASEAN or #ASEAN2018 hashtags. Below are several Tweets related to the ASEAN Summit as the world leaders make their way to Singapore, get ready for a week of meetings, and engage in digital diplomacy that will share the future of ASEAN in the years ahead: 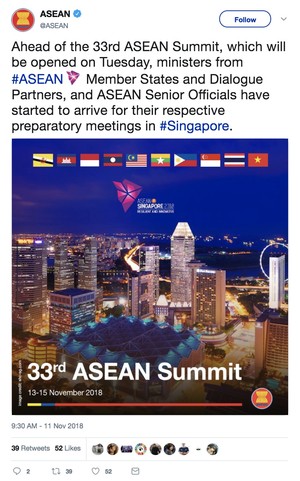 About Twitter
Twitter is what's happening in the world and what people are talking about right now. From breaking news and entertainment to sports, politics, and everyday interests, see every side of the story. Join the open conversation. Watch live streaming events. Available in more than 40 languages around the world, the service can be accessed via twitter.com, Twitter Lite (mobile.twitter.com), an array of mobile devices, and SMS. For more information, please visit about.twitter.com, follow @TwitterSG, and download both the Twitter and Periscope apps at twitter.com/download and periscope.tv.

Mediacorp And Spackman Entertainment Group First-Ever Co-Production To Bring Together Powerful Storytelling, Talent And Mix Of Familiar And Fresh Faces From Korea And Singapore