SINGAPORE - Media OutReach - 16 November 2018 - As the world tuned in for the 33rd #ASEAN Summit (and its related Summits) this week, citizens around the world turned to Twitter for leaders' perspectives, expert insights, and to engage with the #ASEAN2018 conversations.

From the Opening Ceremony on 13 November when Prime Minister of Singapore Lee Hsien Loong welcomed all participating global and ASEAN leaders, to the Closing Press Conference on 15 November, nearly 2.1M Tweets were shared around the world. Below is a global heatmap showing the live Twitter reaction to #ASEAN2018 this past week.

The global conversation around #ASEAN2018 peaked at 2100hrs SGT on 13 November around the official Opening Ceremony of the ASEAN Summit. 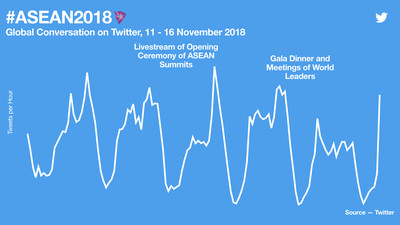 Twitter is the best place to see every side of what's happening at #ASEAN2018. From regional trade agreement negotiations, to talks around denuclearisation of the Korean Peninsula, and even to President Joko Widodo's surprise visit to a popular Indonesian eatery in Singapore's busiest shopping district; people from around the region tuned into Twitter to participate in the public conversation about the summit.

Twitter also partnered with the Singapore Ministry of Foreign Affairs to livestream some of the key moments during the Summits via their official Twitter account @MFAsg.

These are the top Tweets and top mentioned leaders on Twitter during the Summit: 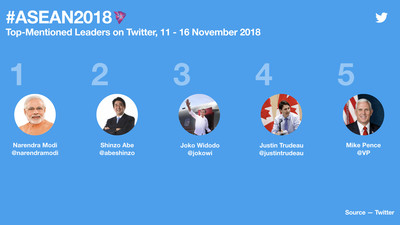 From experts live-Tweeting their analysis and observations, to interested citizens joining the conversation, Twitter again demonstrated that it is one of the best ways to see what's happening in the world and to talk about it.

About Twitter
Twitter is what's happening in the world and what people are talking about right now. From breaking news and entertainment to sports, politics, and everyday interests, see every side of the story. Join the open conversation. Watch live streaming events. Available in more than 40 languages around the world, the service can be accessed via twitter.com, Twitter Lite (mobile.twitter.com), an array of mobile devices, and SMS. For more information, please visit about.twitter.com, follow @TwitterSG, and download both the Twitter and Periscope apps at twitter.com/download and periscope.tv.