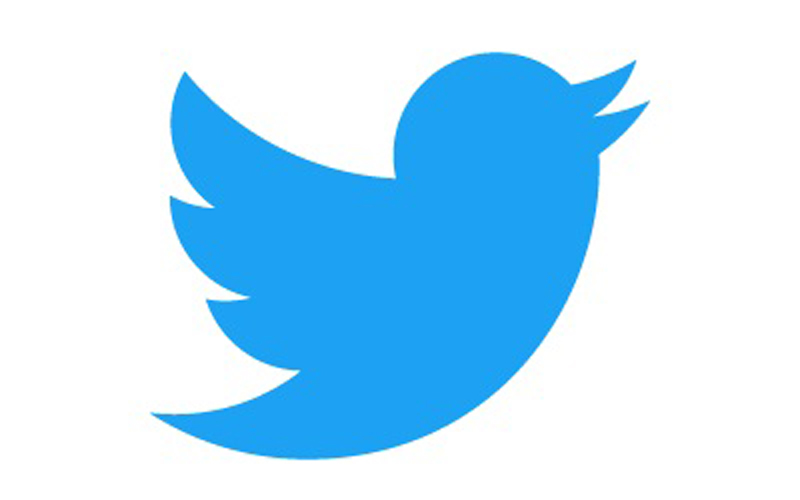 SEOUL, SOUTH KOREA - Media OutReach - 11 December 2018 - Twitter and Mnet Asian Music Awards (MAMA), the biggest music festival in Asia, has joined hands again to engage Kpop fans worldwide on Twitter. To commemorate its 10th anniversary, MAMA's partnership with Twitter has expanded to include a brand new category -- "Worldwide Icon of the Year". This is in addition to voting for the "Best Asian Style Award" in Hong Kong, viewing of the red carpet live streams on Twitter for both Japan and Hong Kong, and joining in the #2018MAMA conversations with customised emojis. From voting for their favourite Kpop artistes/bands to keeping updated on the live events, Twitter is the best place for Kpop fans all over the world to be a part of the 10th MAMA Awards Ceremony, find out what's happening in real-time and to talk about it with other Kpop fans. 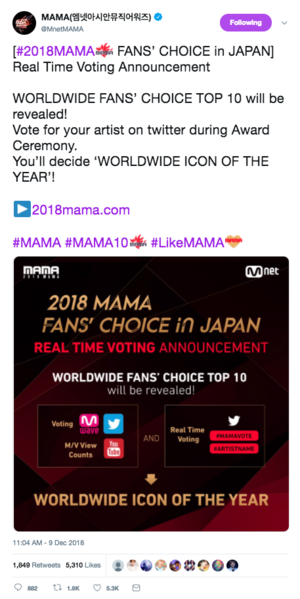 Real-time voting for the first-ever "Worldwide Icon of the Year" award will be held during the 2018 MAMA Fans' Choice in Japanaward ceremony from 19:00 to 21:00 JST on 12 December 2018, and this voting process will take place exclusively on Twitter. Fans are required to include both the #MAMAVOTE hashtag and the artistes/bands' official hashtag (#ARTISTNAME) within their Tweet for their votes to be considered valid.

The top 10 nominees for the "Worldwide Icon of the Year" will be announced during the Fans' Choice in Japan segment of 2018 MAMA in Japan. These 10 artistes/bands shortlisted for the award were selected through a series of pre-voting based on a combination of Twitter votes, official MAMA voting on their website and Music Video online views from 1 November to 9 December 2018. Follow the MAMA official Twitter account @MnetMAMA to find out the 10 nominees in real time to start the Twitter voting process!

2018 MAMA Red Carpet Live Stream and Best Asian Style Award
The 2018 MAMA's red carpet ceremony will also be live streamed through a special live page (https://twitter.com/i/events/1070115068908462080) for fans to get a closer look at their favourite artistes/bands' red carpet looks. As part of the expanded partnership, MAMA will live stream both red carpet ceremonies in Japan from 17:00 JST on 12 December and in Hong Kong from 17:00 HKT on 14 December.

Fans can also vote in real-time on Twitter during the 2018 MAMA in Hong Kong red carpet ceremony on 14 December at 17:00 HKT for their favourite artistes/bands to win the "Best Asian Style Awards" with the hashtags #MAMARedCarpet and #ARTISTNAME. Kpop artistes/bands with the most number of Tweet votes from the red carpet will be awarded the Best Asian Style prize during the Hong Kong ceremony.

Join the Twitter conversation with exclusive 2018 MAMA Emojis
Twitter launched three emojis in celebration of MAMA's 10th anniversary. Tweeting the hashtags #2018MAMA or #MAMA10 will generate a flame shaped emoji, symbolising the fans' passion and enthusiasm for their favourite artistes/bands. Tweeting #LikeMAMAwill generate a second emoji, the MAMA logo in the shape of heart, to express the love from Kpop fans. Lastly, a third emoji will be of a red carpet, appearing when fans Tweet #MAMARedCarpet. Kpop fans around the world can use any of these hashtags to see and join the 2018 MAMA conversation on Twitter right now.

The 10th anniversary of the global Kpop music festival is held in Korea on 10 December 2018, in Japan on 12 December 2018, and in Hong Kong on 14 December 2018. Top Kpop artistes/bands including BTS (@BTS_twt), GOT7 (@GOT7official), Wanna One (@WannaOne_twt), TWICE (@JYPETWICE), IZ*ONE (@official_IZONE) and others will be starring in this special 10th edition of 2018 MAMA. Follow the official 2018 MAMA account on Twitter (@MnetMAMA) for exclusive performances and behind-the-scene footage!

Here are some of the top fan Tweets for the #2018MAMA conversation on Twitter so far:

About Twitter
Twitter, Inc. (NYSE: TWTR) is what's happening in the world and what people are talking about right now. On Twitter, live comes to life as conversations unfold, showing you all sides of the story. From breaking news and entertainment to sports, politics and everyday interests, when things happen in the world, they happen first on Twitter. Twitter is available in more than 40 languages around the world. The service can be accessed at twitter.com, on a variety of mobile devices and via SMS. For more information, visit about.twitter.com or follow @TwitterKorea. For information on how to download the Twitter and Periscope apps, visit twitter.com/download and periscope.tv.