PHILIPPINES - Media OutReach - 12 November 2018 - Thailand-based East-West Seed outperformed global giants Bayer and Syngenta in the first-ever Access to Seeds Index for South and Southeast Asia, which evaluated the efforts of 24 leading seed companies in the region to support growth in the productivity of smallholder farmers, one of the main targets of the United Nation's Sustainable Development Goals (SDGs). 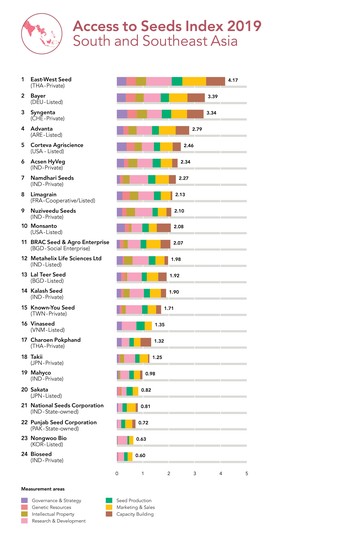 In South and Southeast Asia about 350 million people are undernourished, a number that has barely changed in the past two years, according to a recent United Nations report.[1]. Around 30% of the children in the region are malnourished. Smallholders provide up to 80% of the food supply, so helping the 170 million smallholder farmers of South and Southeast Asia to grow more and more nutritious food is key to achieving food and nutrition security.

The Access to Seeds Index found that leading seed companies have seed sales activities in all countries in South and Southeast Asia. However, investments in seed production or breeding tend to be concentrated in a select number of countries, most notably India and Thailand. As a result, the development of local seed industries in Afghanistan, Nepal, Sri Lanka, Myanmar, Laos and Cambodia run the risk of lagging further behind as few leading seed companies invest in these countries. Ultimately, 80% of smallholder farmers in South and Southeast Asia have yet to be reached.

"Increasing yields, tackling climate change challenges and reducing the environmental impact of agriculture, it all starts with the seed farmers use," says Ido Verhagen, executive director of the Access to Seeds Index. "The seed industry plays a key role in improving the accessibility and affordability of quality seeds for smallholder farmers."

East-West Seed leads the industry with a business model built around smallholders, including breeding for their specific needs, selling seeds in small packages and providing training. Its client base is made up almost entirely of smallholders (98%), indicating that successful business models that work for both small-scale farmers and a company itself are possible. The top 10 of the index further includes three seed companies from India and six global seed companies from outside the region.

The five highest scoring companies are all globally active. Besides East-West Seed (#1), Advanta (#4) has its roots in the region. The others, Bayer (#2), Syngenta (#3) and Corteva Agriscience[2] (#5), have all had breeding, production and distribution activities in the region for a long time. Bayer's clientele in the region comprises about 95% smallholder farmers.

"The picture that emerges from our data is that of a highly competitive, research-driven seed industry. Companies from the region itself play an important role, especially on research and development, with breeding programs specifically focusing on the needs of smallholders," Verhagen adds. "Global companies like Bayer and Syngenta placed high in our ranking, indicating that they have become well-rooted in the region."

The Access to Seeds Index research notes that the companies strictly adhere to national laws and/or international treaties concerning genetic resources but could do more to support the conservation and use of agrobiodiversity in the region.

On intellectual property, half of the companies explicitly state that they do not limit the use of their varieties for further breeding or the use of farm-saved seeds. The research adds that few companies have tailored pricing strategies for their patent-protected material in order to ensure affordability for smallholder farmers.

The Access to Seeds Index for South and Southeast Asia is one of the first SDG benchmarks published by the World Benchmarking Alliance. The initiative was launched last September during the UN General Assembly in New York. By measuring and comparing corporate performance on the SDGs it aims to encourage the private sector to step up their efforts towards achieving the SDGs. The Access to Seeds Index was developed with support of the Bill & Melinda Gates Foundation and the Government of The Netherlands.